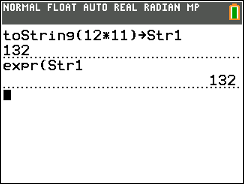 Returns the string representation of the value of the input.

This command is found only in the Catalog. Press:

The toString( command, given any value including real numbers, complex numbers, lists, or matrices, returns the string representation of the value of the input.

toString( has less limitations than the eval( command. It can handle lists, matrices, and complex numbers. Another difference from eval( is that toString( is affected by display mode changes like Fix.