If you are considering using xLIB to produce amazing TI-Basic programs, I trust that you are an experienced programmer and already know the basics of TI-Basic programming. If you don’t, then this tutorial will still teach you, but it may not be as easy to understand.

xLIB is a graphical all-around application to enhance TI-Basic programs with the power of assembly. Bundled in xLIB are many useful functions to allow you to use sprites, tilemaps, direct input, and many other features that you see in many assembly games from your TI-Basic programs. It is similar to Detached Solution’s [*http://www.detachedsolutions.com/omnicalc/ Omnicalc], and if you have experience with Omnicalc, you should have no problem with xLIB.

When you install xLIB, it will install a parser hook that will detect real() requests. All xLIB functions begin with real(, and when the command is executed, the function will be intercepted and carried out by xLIB.

The real( function can be accessed by pressing [MATH] and scrolling to the CPX menu.

This is one of the simplest commands in xLIB. Just enter real(0,1 in your program to quickly clear the screen. You will almost never have to use ClrDraw after this, and, in addition, it also clears the home screen, too!

updateLCD -- This can either be 0 (don’t update the screen; useful for when you want to draw something on the screen with multiple commands and want for your picture to appear all at once) or 1 (update screen). If you want, you can drop this argument and have only real(0, and xLIB will automatically update the screen, and you’ll save two bytes, but there is a small possibility you could get an unexpected result, so do so at your own risk.

A logic argument is often required in xLIB, here are the 4 possibilities:

We will first begin with one of the most useful tools xLIB has to offer: sprite commands. A sprite, in a few words, is an image that you can move around on the screen. If you have ever played a video game, the characters and elements such as people, weapon blasts, coins, bricks, etc. are sprites.

Before you can use the xLIB commands to draw sprites, you must create and store them. Sprites are stored and read from normal TI-OS pictures. xLIB can recall sprites from pictures 1-255, regardless if they're archived or not.

Let us look at xLIB's sprite function. It's used to place a single sprite on the screen.

Now, do not let the number of arguments of that command scare you into submission; it becomes very simple once you get the hang of it. Let's walk through it, shall we?

real(1 -- Indicates you want the sprite command of xLIB.

Y Position -- The Y-coordinate of where you want the sprite to be displayed on the screen. This can range from 0-63, but as with the X-coordinate, you may want this to be larger or smaller than the screen's height.

Sprite Height -- Unlike the sprite width, this is the actual height in pixels of the sprite, so the height of an 8x8 sprite, for example, would be simply be 8. Don't get the values for sprite height and width confused, or you will get an unexpected result. Sprite height can range from 0 to 63 bytes.

Sprite Pic -- This is the Pic# in which the sprite is located in. This ranges from 1 to 255. NOTE: xLIB considers 0 to be Pic 10, so entering zero here will actually read from Pic 10.

Y Offset -- Is Y offset of the sprite you want, but is the number of pixels from the top to where the sprite is located.

To explain both X and Y offsets better in one paragraph, let's say you have an 8x8 pix sprite you want to use that is located 56 pixels from the left and 24 pixels from the top of the spritesheet picture. The X offset of that would be 7 bytes (because 7*8==56), and the Y offset would simply be 24 pixels.

Drawing Logic -– This arguments tells xLIB how it should draw the sprite on the screen. There are four possibilities: 0 == overwrite, 1 == and, 2 == Or, 3 == xor. More information can be found in the Logic section.

Horizontal Flip -- This argument is either a 1 or 0. If it is 1, then xLIB will draw your sprite horizontally. This is a big time and space saver, as you only would have to draw a character, say, that looks to the left, and use this to flip it when you want the character to look the other direction.

There are many ways to use the sprite command, even with masked sprites!

One of the strongest features of xLIB is that it supports tilemapping through the request, real(2. First let me explain what tilemapping is. Let's say you have an RPG, and the main character enters a forest, the background of the forest, like all the trees and plants are all part of the tilemap. How do you do that though?

Well, you could store each individual background as a picture and then recall it as you come across it, but that takes up a lot of memory, and also, how would you do collision detection with the trees and plants? The solution programmers come up with is called a tilemap.

The tilemap is a matrix where each tile number corresponds with a particular sprite on a sprite sheet. Thus, you can do collision detection by checking what tile number it is in the tilemap. xLIB supports 8*8 tiles in a tilemap. Thus, a regular tilemap would have dimensions of 8*12. So if I have a tilemap like this 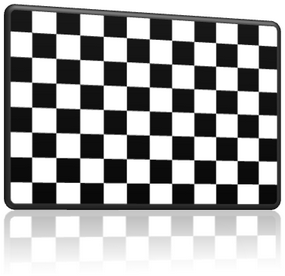 X_offset is a number that pinpoints the x-coordinate in the matrix at which xLIB starts reading the tilemap. This is used for scrolling, so for now, you might just want to leave it 0.

Y_offset is a number that pinpoints the y-coordinate in the matrix at which xLIB starts reading the tilemap. This is used for scrolling, so for now, you might just want to leave it at 0.

ScreenStartX is a number from 0-12 which pinpoints the column on the screen in which you want to start drawing the tilemap. This is used for a "windowed" tilemap. Note that when you're in 16*16 tilemap mode,the values are 0-6 (*16)

ScreenEndX is a number from 0-12 which pinpoints the column on the screen in which you want to end the tilemap. This is used for a "windowed" tilemap. Note that when you're in 16*16 tilemap mode,the values are 0-6 (*16)

ScreenStartY is a number from 0-8 which pinpoints the row in which you want to start drawing the tilemap on the screen. This is used for a "windowed" tilemap. Note that when you're in 16*16 tilemap mode,the values are 0-4 (*16)

ScreenEndY is a number from 0-8 which pinpoints the row in which you want to stop drawing the tilemap on the screen. This is used for a "windowed" tilemap. Note that when you're in 16*16 tilemap mode, the values are 0-4 (*16)

NOTE: The above 4 arguments are all in bytes.

Now, an excellent feature of xLIB is that it can read picture data that is archived, and it supports multiple picture data! What does that mean? An ordinary picture has 12*8, 96 tiles. What if that isn't enough? Well, xlib can support unlimited tiles (actually 65536 tiles) so the picture after mPic_Num contains the next tiles 96-191.

TileSize is an interesting argument. A "0" (or basically omit the argument) represents a tilesize of 8*8, the regular mode. If the number is "16" instead, it represents you want the normal tile size to be 16*16. This will change several of the other arguments in the tilemap function. What's the use of this? Well first of all, some games will have 16*16 tiles, so instead of forming 4 8*8 tiles in a matrix, you can have just one 16*16 tile. This allows for smaller matrix sizes and saves a lot of space.

Map_UpdateLCD is the same as all the other UpdateLCD's. "0" represents no, "1" represents yes, the current screen data will be updated.

If you run this program and you have a black square as tile 0 in Pic1, then it will draw the following screen:

Recalling pics can be a very useful ability for a number of functions. The syntax is as follows:

rPIC_Num is the picture you wish to recall.

rPIC_Method is the method you wish to use to recall, 0 for overwrite, 1 for AND (draws white for on pixels), 2 for OR (draws black for on pixels), or 3 for XOR (which inverts on pixels) like always.

Recall_UpdateLCD is the same as all the other UpdateLCD's. 0 represents no, 1 represents yes, the current screen data will be updated.

So, you may be wondering how this could be useful. One very obvious use is grayscale splash screens. If you have two pictures, lets say pic 0 and 1, you could switch between which is displayed within a loop, thus resulting in a gray effect where there is difference between the two pictures.

In Assembly programming, they have use of a buffer, basically another extra screen to work with. In normal TI-Basic, we don't have access to that, but we can essentially use pictures as buffers. One example of this is a background image to a game, you can save it in a separate picture, then recall it each time you want the background displayed.

Another code you can use uses the xor logic:

Screen scrolling is a very basic function, although it is very handy in some situations.

The following numbers are what you put in place of Scrl_Direction, to tell the calculator which way you want your screen to move.

The code above will scroll the screen right 5 pixels, then toggle a LCD update.

The contrast isn't all that hard to do inside TIOS, although if you want to set it to a certain level, or see what level you're on, this code is for you.

Contrast_Function = The action to take, shown below.

ContrastVal = New contrast value. Can be a value from 0-39

If you're setting the contrast, then you need to input a number for ContrastVal.

If you were to merely get the contrast level, you would input the following:

Then, you would simply type in Ans, and then it will show you the level of contrast. Otherwise, if you were to type in:

Then that would set your contrast to level 26. Simple, I know.

If someone does not have xLIB installed, it may be difficult to alert them to this. To check for xLIB installation, the following code will work.

In the case that xLIB is not installed, the message "XLIB NOT ENABLED" will be displayed and the program will quit. Otherwise, operation occurs normally.

Collision detection is a necessity if you're going to make a graphic RPG, or any other game.

You can create collision detection many different ways. For instance; lists. If you wanted to use lists you would have to store all of the coordinates into a list, and then use if statements to check if the character is on that spot. Even though you can do collision detection with lists, I wouldn't reccomend it. The problem with using lists is that they aren't very memory efficient. That's why we are going to use the fPart( command.

Here is the code example for detecting the decimal.

Using the fPart( command you can also do detection for special spaces. For example a door. The decimal .01 can stand for a place you can't walk into, and .02 can stand for a door.

Using collision detection you can create much more than borders and doors. You can create many other spaces, such as coins, portals, water, etcetera.